Back to Our Blog Next Article

In our last post, we explained the basics of streaming with Spark. Today, we want to talk about graphs and explore Apache Spark GraphX tool for graph computation and analysis. It is necessary to say that GraphX works only with Scala.

A graph is a structure which consists of vertices and edges between them. Graph theory finds its application in various fields such as computer science, linguistics, physics, chemistry, social sciences, biology, mathematics, and others. Problems connected with graph analysis are rather complicated, but there are many modern convenient instruments and libraries for these purposes.

In this post, we will consider the following example of the graph: the cities are the vertices and the distances between them are the edges. You can see the Google Maps illustration of this structure in the figure below. 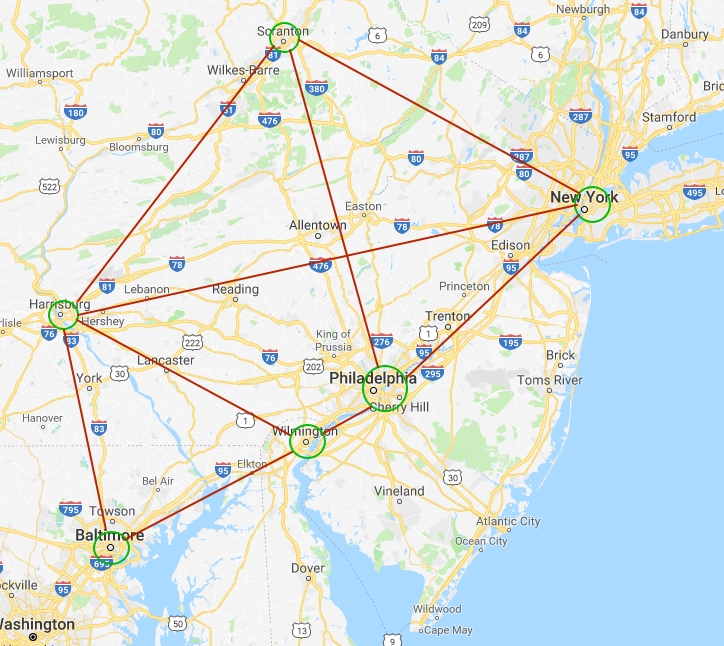 To start the work with the graph mentioned above, let’s launch Spark shell. To do this go to the Spark Home Directory and type in the console:

Now, we have to make some imports:

To create property graph we should firstly create an array of vertices and an array of edges. For vertices array, type in your spark shell:

The attributes of the vertices mean the city name and population, respectively.

As the output you will see the following:

To create edges array, type in the spark shell:

The first and the second arguments indicate the source and the destination vertices identifiers and the third argument means the edge property which, in our case, is the distance between corresponding cities in kilometers.

The above-mentioned input will give us the following output:

Next, we will create RDDs from the vertices and edges arrays by using the sc.parallelize() command:

To illustrate the filtration by vertices let’s find the cities with population more than 50000. To implement this, we will use the filter operator:

And this is the result we get:

One of the core functionalities of GraphX is exposed through the triplets RDD. There is one triplet for each edge which contains information about both the vertices and the edge information. Let’s take a look through graph.triplets.collect.

As an example of working with triplets, we will find the distances between the connected cities:

As a result, you should see:

Now, let’s consider another type of filtration, namely filtration by edges. For this purpose, we want to find the cities, the distance between which is less than 150 kilometers. If we type in the spark shell,

we will see the next result:

Another interesting task which can be considered here is aggregation. We will find total population of the neighboring cities. But before we start, we should change our graph a little. The reason for this is that GraphX deals only with directed graphs. But to take into account edges in both directions, we should add the reverse directions to the graph. Let's take a union of reversed edges and original ones.

Now we have an undirected graph with all the edges and directions taken into account, so we can perform the aggregation using aggregateMessages operator:

To see the result, type:

You should get the following output,

GraphX is very useful Spark component which has many applications in different fields, from computer science to biology and social sciences. In this post, we have considered the simple graph example where the vertices are the cities and the edges are the distances between them. Some basic operations such as filtration by vertices, filtration by edges, operations with triplets and aggregation have been applied to this graph. All in all, we showed that Apache Spark GraphX component is very convenient and applicable for graph computations.

Back to Our Blog Next Article

Intro to data science with Python